A satellite is a name of any object, which orbits arounds a planet. Satellites can be divided into natural – the ones, which were formed naturally – and artificial – satellites created by humans. The word satellite is mainly used to refer to the artificial ones.

The first satellite was Sputnik, sent into space by Soviet Union in 1957. Nowadays there are thousands of satellites on many orbits. They are used for telecommunication, positioning (GPS), scientific experiments and imaging of the Earth surface.

The image to the right comes from the SEOS project. It shows us how many satellites are orbiting the Earth nowadays. 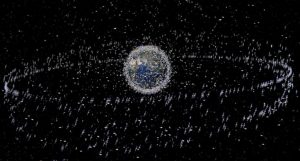 Related resources:
« Previous term: Sandur
Next term: Scavenger »
Polarpedia has information categorized by main topics. Click on an icon below to view the available terms.