Although dog sledding may have existed before,  archeological evidence puts the earliest date at more than 4000 years ago. Some anthropologists suggest that human habitation and survival in the Arctic would not have been possible without sled dogs. As far as archeologists can tell, dog sledding was invented by the native and Inuit people in the northern parts of modern Canada, and it then rapidly spread throughout the region. Early dog sleds didn’t look exactly like dog sleds today. Instead of a large sled led by many dogs, it was usually just a single dog pulling minimal cargo – usually firewood and other supplies.

The most popular sled dogs breeds nowadays are:

Sled dogs team members are divided into 4 cathegories, depending on their position.

Each sled dog team has a lead dog, or in some cases two lead dogs. Lead Dogs are fast and intelligent, and must be able to set the pace and direct the team effectively.

Directly behind the lead dogs are Swing Dogs, who help “swing” the team in the turns or curves. The dog(s) at the very back of the sled are known as Wheel Dogs, and are typically the largest and strongest of the group. Their job is to pull the sled out and around corners or trees. Finally, the remaining dogs in the middle are known as Team Dogs.

In modern days sled dogs are used for winter sport – sled dog racing. The most famous long-distance race is the Iditarod (Alaska), also known as the “Last Great Race on Earth”. The race consists of fierce mountains, frozen rivers, thick forests, and desolate tundras. Each team of 12–16 dogs must go from Anchorage all the way to Nome. 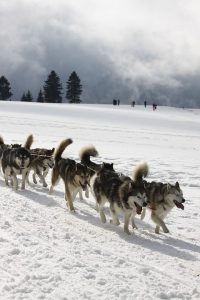 « Previous term: Sill
Next term: Smoltification »
Polarpedia has information categorized by main topics. Click on an icon below to view the available terms.