Snow bunting (Plectrophenax nivalis) is the northernmost breeder of any land-based bird, these “snowflakes” are known to inhabit patches of tundra not covered by ice. It is widespread in high Arctic tundra of North America, Ellesmere Island, Iceland, higher mountains of Scotland, Norway, Russia, North Greenland, Siberia.

It’s a hardy, medium-sized songbird of the high Arctic and snowy winter fields. Sometimes known as the ‘snowflake’, its white plumage and dancing flight give its flocks the appearance of swirling snow flurries.

After the molt in the late summer the male looks brownish with a brown and black striped back. Underneath the colored feather tips, the back feathers are pure black and the body feathers all are white. The male wears off all of the feather tips by actively rubbing them on snow, and he is immaculate white and jet black by the time breeding begins.

This bird places its nest deep in cracks or other cavities in rocks. Although such nest sites are relatively secure from predators, rocks are cold. The thick nest lining of fur and feathers helps keep the eggs and nestlings warm, but the female must remain on the nest for most of the incubation period 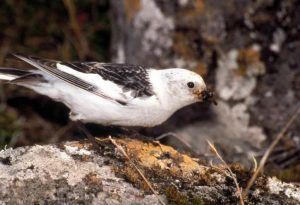 « Previous term: Snow blindness
Next term: Snow cornice »
Polarpedia has information categorized by main topics. Click on an icon below to view the available terms.