The troposphere is a layer of the Earth’s atmosphere located between the ground and about 14 km altitude. It is the part of the atmosphere where the temperature decreases rapidly with increasing altitude.

In the figure, the lower part of the temperature profile, from the ground to 14 km altitude, air temperature decreases with altitude. 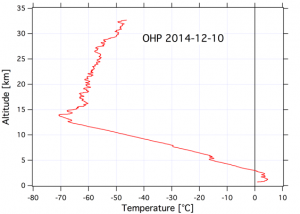 Related resources:
« Previous term: Tropopause
Next term: Tsunami »
Polarpedia has information categorized by main topics. Click on an icon below to view the available terms.