Walrus – Odobenus rosmarus – is the gentle giant of the Arctic. Walruses have wrinkled brown and pink skin,  flat flippers, and lots of blubber on their bodies to keep them warm in the cold Arctic water. Adult walruses weigh from 600 to 1,500 kilograms and can be as long as 3,2 meters.

They have long tusks and sensitive whiskers, allowing them to find their favorite meals way down in the deep, dark ocean floor. They don’t move quickly on land but are swift in the water (up to 35 km/h).Other adaptations to diving include a large percentage of blood in their bodies to carry oxygen (about 12%), while their red blood cells (that carry the oxygen) are exceptionally large. In addition, the muscle of walruses has a high content of the oxygen-binding protein myoglobin. Myoglobin transports and stores oxygen in muscle tissue. When they dive, the blood flow is cut off from their skin and stomach, toward organs where oxygen is needed, such as heart and brain. All of these adaptations allow for an efficient and lengthy use of oxygen stores, they can remain submerged for as long as ten minutes (there was a  confirmed reord of 25 minutes); they slow their heartbeat while diving.

Walruses can live up to 40 years. The females only have a calf every two to three years. The babies (calves) can swim as soon as they are born, stay with their mother for over two years.

Every spring the walruses go north to feed, with the melting edge of the pack ice. They feed all summer long.Walruses are carnivores, but they aren’t ferocious hunters. Walruses feed on benthic shellfish like clams, whelks, cockles, and mussels. Some calculations show that a walrus can find and eat a shellfish in about six seconds. This speed allows the walrus to consume plenty of food on a dive.

The main predators of the walrus are polar bears, killer whales, and humans. In the 1950s, the population of walruses was almost eliminated due to commercial hunting, but the population was brought back to a thriving number in the 1980s. Nowadays its fatty tissues might accumulate toxins. 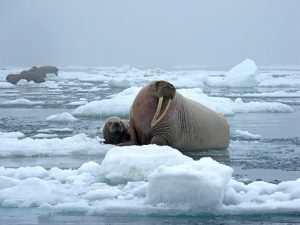 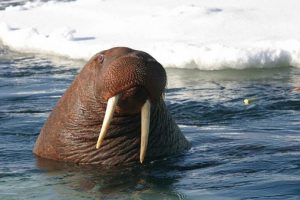 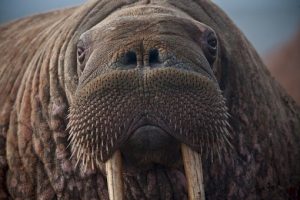 « Previous term: Volumetric method
Next term: Water sky »
Polarpedia has information categorized by main topics. Click on an icon below to view the available terms.