The Wilson Cycle explains the process of the opening (beginning) and the closing (end) of an ocean. 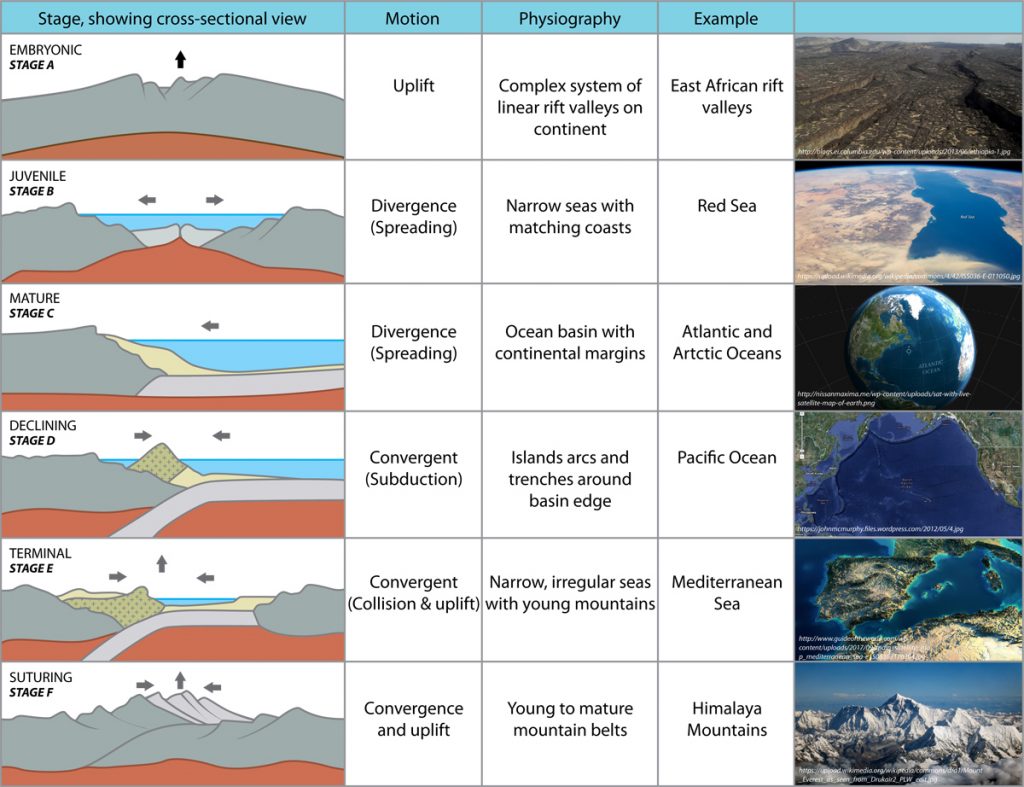 Embryonic Ocean Basin (Stable Craton with a hot spot underneath) Stage A:
At first, there is a stable Continental Craton, which has a hot spot just underneath. This warm hot spot heats up the craton (continent) and causes it to swell upwards and in the breakup zone the continental crust gets thinner and thinner and starts to crack, which eventually causes the continent to break into two continents and a small ocean will with time form in the middle. The East African rift Valley is an example of stage A.

Juvenile Ocean Basin (Early Rifting of a Continent) Stage B:
Now the spreading of earth plates starts and a small ocean has formed between the newly broken up continents. As the continents continue to drift apart, the edges of both continents will cool down and therefor get heavier and sink below the newly formed sea. This boundary is called a divergent boundary. The Red Sea is an example of stage B.

Mature Ocean Basin (Full ocean basin) Stage C:
Stage C, is when a large ocean has formed between two continental margins and spreading still occurs.
A well developed mid ocean ridge has formed along the divergent boundary. The Atlantic Ocean is an example of stage C.

Declining ocean basin (Subduction Zone) Stage D:
At this stage, a subduction zone has formed and the ocean begins to close up. One of the simplest ways a subduction zone forms is at the edge of a continent, where one tectonic plate is subdued below another tectonic plate. This is a convergent boundary and eventually the ocean will disappear and all that is left is a remnant ocean basin. The Pacific Ocean is an example of stage D.

Terminal Ocean Basin (Closing Remnant Ocean Basin) Stage E:
At this stage, the continents are almost colliding. Formation of magma happens deep in the subduction zone and small mountains are building up. In the subduction zone both metamorphism (change in the rocks composition), folding (the earth layers are “bending”) and faulting (the earth crust cracks) occurs. The boundary is convergent and the sea is at this stage narrow and irregular. An example of stage E is the Mediterranean Sea.

Suturing (Continental Collision) Stage F:
This is the final stage, before the mountain chain eventually will erode down to a peneplain (that’s when the mountains have eroded all the way down to the sea-level). At stage F, the two continents moving towards each other will collide and a mountain chain forms. An example of this stage is the Himalaya Mountains.