There is seldom anything “wrong” with problem individuals, like illness or injury, but rather there is something wrong with the environment in which they live. The most common reasons for an animal to become a problem individual are: invasion of their habitat by humans; shortage of natural food sources; humans’ deliberate habituation of wildlife in order to photograph them, hunt them or simply watch them. Normally, the behaviour will not cease by itself and mitigation actions by wildlife managers is needed. 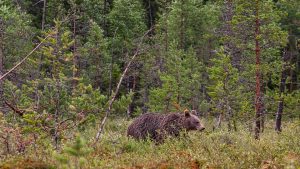 So-called problem individuals of wildlife are normally quite ordinary animals that either lack food or have their natural habitat invaded by humans. Photo: Alexander Kopatz, NIBIO