Human habituation of wildlife may occur if wild animals are repeatedly exposed to the presence of people. Wild animals can become habituated to humans’ infrastructure (buildings, roads, artefacts) and to humans themselves. The more predictive we are to the animals, the easier it is for them to become habituated. Wildlife is more easily habituated to infrastructure than to people, because people are less predictive.

Habituation of wild animals are undesirable. It reduces the animals’ normal elusiveness and fear responses. Instead of avoiding areas of human activity, and fleeing at the sight of people, the animals choose to approach. While humans appreciate some habituation of many animals, habituation typically also leads to human-wildlife conflicts. More often than not, strong habituation is detrimental to wildlife survival, and may even pose a threat to human safety. 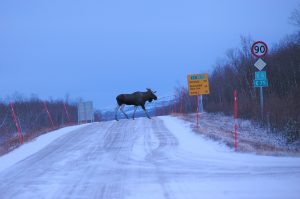 Some habituation to human infrastructure is necessary for wildlife to survive. Photo: Paul E. Aspholm, NIBIO