Arctic tern (Sterna paradisea) is a medium-sized, slender white bird with black cap, deeply forked, long tail and white wings with some dark at tips, well known for its long yearly migration. Its travel from its Arctic breeding grounds to its wintering grounds of Antarctica may cover perhaps 40,000 km, and is the farthest yearly journey of any Bird. The birds survive the vast journey by dipping down to the sea surface to catch fish and other food (invertebrates) as they ravel. It nests once every one to three years (depending on its mating cycle); once it has finished nesting it takes to the sky for another long southern migration. The Arctic tern has a continuous worldwide circumpolar breeding distribution.

Arctic terns can live for 15 to 30 years, meaning the record-breaking tern could fly as far as 3 000 000 kilometres over its lifetime, the rough equivalent of four round trips to the moon. 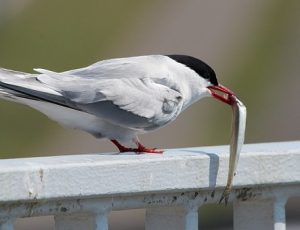