Arctic tree line is the northern limit of tree growth; the sinuous boundary between tundra and boreal forest; beyond which the climate is too harsh for trees to grow. It circles all of earth’s northern landmasses for more than 13000 kilometers. It is the largest ecological transition zone on the planet’s surface—a fuzzy boundary that actually loops north and south, and may appear gradual or sharp, depending on locale; It is taken by many to delineate the actual southern boundary of the Arctic zone. Past and recent changes in the position of the arctic tree line and spatial structure of nearby forests are indicators of climate change.

The position of the arctic tree line remained rather stable across the northern hemisphere from 3500 years BP to the present. Studies of northern circumpolar tree line have related tree distribution to numerous environmental controls, such as permafrost, moisture, heat, radiation, and frontal circulation patterns (Barry, 1967; Bryson, 1966; Hare and Ritchie, 1972; Hustich, 1966; Larsen, 1989).

Recent modeling experiments indicate that the circumpolar tree line could be shifted north tens to hundreds of kilometers if anticipated magnitudes of global warming due to increases in atmospheric greenhouse gasses are realized. 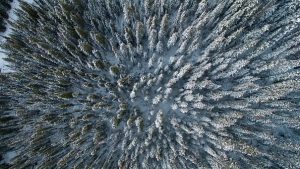 « Previous term: Arctic tern
Next term: Arctic tundra »
Polarpedia has information categorized by main topics. Click on an icon below to view the available terms.