Batagaika crater is a thermokarst depression, a megaslump, the largest of its kind: almost 1 km long and 86 m deep and it’s growing fast. It is located in Siberia, located around 660 km north-east of the region’s capital city of Yakutsk, sits near the village of Batagai, in the Verkhoyansk district.

By locals it is often referred to as “doorway to hell”.

The trigger that led to the crater started in the 1960s. As a result of rapid deforestation, the ground was no longer shaded by trees in the summer,  so the sunlight slowly warmed the ground, and there was no transpiration from trees, cooling the surface.  This combination of less shading and less vapid transpiration led to warming of the ground surface, the layer of soil right above the permafrost started to warm and permafrost itself began to thaw. Once this process started and the ice was exposed to warmer temperatures, the phenomenon escalated.

The Batagaika crater opens up a vast area of previously buried permafrost, some of which first formed many thousands of years ago.

Researchers believe the exposed ice and soil along the crater’s edges could hold up to 200,000 years of geological and biological history.

Batagaika has disgorged a handful of animals, and since it began growing, likely in the early 1980s Equus lenensis (a Pleistocene horse) and Bison priscus (prehistoric steppe bison) have emerged from the thawing soil, as have assorted remains of cave lions and wolves. 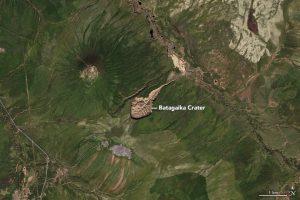