Beluga whale (white whale, Delphinapterus leucas), distributed in high latitudes of the northern hemisphere from the west coast of Greenland westwards to Svalbard is one of the most recognizable and popular whales because of their white skin colour and ‘smiling’ upturned mouth. Beluga whales are among the smallest species of whales, closely related to narwhals. Adult males range from 4 to 6 meters in length and weigh 900 to 1300 kilograms. Females are slightly smaller. Around 40 percent of the white whale’s body weight is blubber, which keeps them warm and stores energy. Unlike other whale species, the bones in beluga’s neck aren’t fused together so it move my head up, down and side to side, and even make different facial expressions. They also can swim both forward and, unlike most other whales, backward.

The animal’s skin is also unusual. It is a very dynamic organ. It is also very thick – about 10 times thicker than in dolphins and 100 times thicker than in land mammals. Whales use it for storing vitamin C, protection against cold and abrasions caused by contact with ice. Beluga whales are opportunistic feeders. They feed on salmon, eulachon, tomcod, smelt, char, rainbow sole, whitefish, saffron and arctic cod, herring, shrimp, mussels, octopus, crabs, clams, mussels, snails and sandworms. A highly social species, beluga whales are extremely vocal. Long ago, scientists and sailors gave beluga whales the nickname “sea canaries,” due to the birdlike sounds these whales make.Belugas produce sounds by building up air pressure in the nasal cavities within their melon, the echolocation organ at the front of their heads, and then forcing the air through a set of “phonic lips” atop each cavity. Some Belugas undertake large-scale annual migrations between summering and wintering sites, while others remain in the same area year-round, shifting offshore only when excluded from coastal habitat by fast-ice formation. Easily caught in shallow water, the beluga has been kept in captivity since the 1860s, and its coloration and adaptability have made it popular at oceanariums. They are friendly towards humans.

In 2009, a captive beluga whale rescued a distressed participant of a free diving competition by pushing her to the surface. 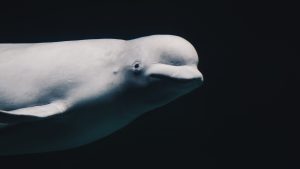