Black carbon is a contamination resulting from the incomplete combustion of fossil fuels, biofuels, and biomass (wood, animal dung, etc.). It is the most potent climate-warming aerosol. As the name suggests, black carbon is a dark particle which absorbs sunlight very efficiently.

The largest black carbon emission sources in the Arctic are agriculture burning and wildfires, on-road diesel vehicles, followed by residential burning, off-road diesel and industrial combustion. Gas flaring may currently be a significant source as well. The burden of atmospheric black carbon has been found to result from long range transport from the Former Soviet Union, Europe, North America and East Asia.

Beyond environmental and climate hazards, black carbon also has a direct health effect on residents of the north, causing respiratory diseases. 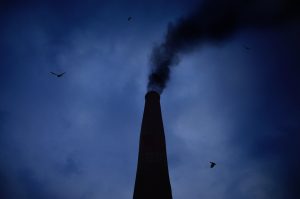 Related resources:
« Previous term: Birds’ guano is cooling the Arctic
Next term: Black hole »
Polarpedia has information categorized by main topics. Click on an icon below to view the available terms.