They differ in size and behaviour. While the grizzly tends to be larger and more aggressive even towards humans, the Eurasian brown bear is usually smaller than the grizzly and also much more shy, elusive and avoiding contact with humans. Brown bears play an important role in wildlife research and conservation, as umbrella species, keystone species and indicator species. 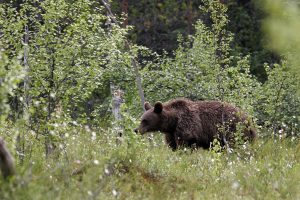 Related resources:
« Previous term: Brinicle
Next term: Bruce Gordon and his pet polar bear »
Polarpedia has information categorized by main topics. Click on an icon below to view the available terms.