They hatch in deep oceans, then migrate to freshwater and return back to the ocean when it is time for them to spawn. Well-known catadromous fish species are eels, especially the critically endangered European eel.

As adults, they make one long migration to the Sargasso sea in order to spawn only once before they die in the ocean. To recap: catadromous fish migrate from the ocean to freshwater, and back to the ocean.

Anadromous fish do the opposite. They migrate from freshwater to the ocean, and back again. 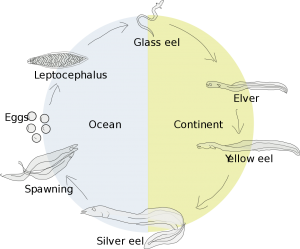 Related resources:
« Previous term: Carrington event
Next term: Catchment »
Polarpedia has information categorized by main topics. Click on an icon below to view the available terms.