Decomposers turn dead organic material into forms that can be absorbed and made into new living material by primary producers. The decomposers have an essential role on Earth. Without them, most nutrients would be lost. At least the recycling of nutrients (the carbon cycle) would go very slow, and the Earth would be a completely different ecosystem for us to live in.

Typical decomposer are fungi and microorganisms. Ecologically, however, we must not forget the scavengers. They complement the role of the decomposers in the decomposition of dead larger animals. When such an animal dies, the scavengers are first on the scene and they do most of the work. Some typical scavengers are foxes, bears and vultures, and invertebrates like flies, snails and worms. With dead plant material, on the other hand, fungi and microorganisms do most of the decomposition. 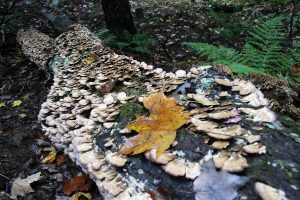