The Novaya Zemlya Effect is a curious optical phenomenon named after an archipelago located north of Russia, in the Arctic Ocean. It was here in January 1597 this phenomenon was first observed and documented by the crew of a ship lead by the Dutch navigator Willem Barents.

It was historically identified with the premature rebirth of the sun at the end of the polar night, is a long range optical ducting phenomenon in the lower atmosphere.

Under Polar conditions, severe air temperature gradients can exist above the ice surface. When there is a strong temperature inversion layer – colder air below a relatively warmer layer – we have the conditions for a Novaya Zemlya (NZ) mirage. It consists of the trapping of light rays beneath a thermocline of large horizontal extent. The inversion layer must be at least 400 km thick.

The Novaya Zemlya Effect was also observed by the famous Ernest Shackleton, during his last expedition to Antarctica in 1914-17. Shackleton saw the sun seven days after it had set below the horizon, and then again two months later, five days before it was scheduled to return. But it wasn’t until 1956, five years after yet another observation of the effect from Antarctica, that it was demonstrated that the Novaya Zemlya Effect is indeed genuine. 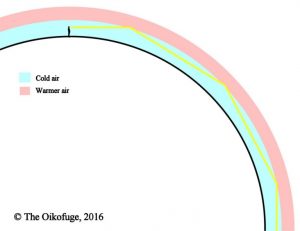 « Previous term: Northwest passage
Next term: Nunatak »
Polarpedia has information categorized by main topics. Click on an icon below to view the available terms.