« Previous term: North-East Science Station
Next term: Novaya Zemlya effect »
Other languages:
Northwest passage is a sea route that connects two oceans: Atlantic and Pacific, through the Canadian Arctic Archipelago. It’s a sea corridor  along the northern coast of North America. For most of the recorded history, the Passage has been virtually impassable, dangerous or even deadly. But with the modernization of ships and also as a result of climate change, sailing through the Canadian Archipelago from Baffin Bay to the Beaufort Sea has become more common and easier.
The quest for the passage was one of the world’s hardest maritime challenges. The route is located 800 km north of the Arctic Circle, and less than 1,930 km from the North Pole.
In 1845 Sir John Franklin led a British team in an attempt to find the passage. Neither he, nor any of his men, returned.
The Passage would not be successfully navigated until the twentieth century when, in 1903-06, Roald Amundsen, Norwegian explorer, made the full transit by sea in his small ship Gjöa.
Many scientists claim melting ice will ultimately open a commercially viable corridor. Estimates as to when summer ice will fully disappear range from 2031-2100.
The potential benefits of a clear Northwest Passage are significant, for example, ship routes from Europe to eastern Asia would be 4,000 kilometers shorter.
Photo: A rare German language variant of Cook’s map of his explorations along the northwest coast of America and the northeast coast of Asia (Source: Wikimedia Commons)
Categories: All Articles, People & Society, Water resources
Most popular terms: Abiotic environment, Benthic algae, Gyre, Igloo, Gákti, Potential energy, Mattak, Benthic fish and animals, Floating method 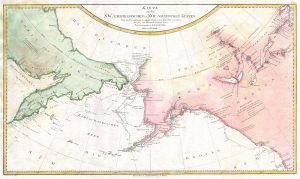