Permafrost is permanently frozen ground. It is soil, rock, or organic material that remains at 0°C or below for at least two years. It is a major part of the terrestrial cryosphere.

In the Northern Hemisphere, regions in which permafrost occurs occupy approximately 25% (23 million km²) of the land area. The thickness of permafrost varies from less than one metre to more than 1500 meters.

Most of the permafrost existing today formed during cold glacial periods, and has persisted through warmer interglacial periods, including the Holocene – the geological epoch which began approximately 11,700 years ago. Some relatively shallow permafrost (30 to 70 metres) formed during the second part of the Holocene (last 6 000 years) and some during the Little Ice Age (from 400 to 150 years ago).

Permafrost can occur either on land (terrestrial permafrost) or on the seabed (subsea permafrost). On land, permafrost temperatures are generally about -5°C. Permafrost in mid- and low- latitude mountains is warm and its distribution is closely related to characteristics of the land surface.

Sub-sea permafrost occurs close to 0°C cover large areas of the Arctic continental shelf – the extended perimeter of each continent and coastal plain, which was part of the continent during the glacial periods.

As it contains much carbon, thawing permafrost contributes to adding additional greenhouse gasses of carbon dioxide (CO2) and methane (CH4) to the atmosphere.

You can read more about this process in the permafrost carbon cycle.

Presentation on permafrost and periglacial processes 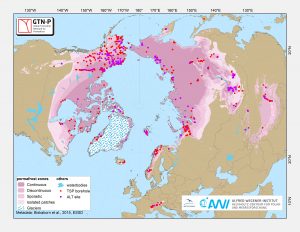