Carbon-based molecules are crucial for life on Earth, because it is the main component of many biological compounds. In Earth’s atmosphere it exists either as carbon dioxide (CO2) or as methane (CH4).

Carbon dioxide leaves the atmosphere by becoming parts of plants through photosynthesis, through precipitation and by other means. Eventually plants and animals die and the carbon returns to the soil. Some organic carbon stays in the soil, while some is released back into the atmosphere through soil respiration.

Permafrost soils remain frozen for long periods of time, and therefore store large amounts of frozen organic carbon, including the carbon that is thousands of years old. Scientists still don’t know the exact amount of carbon contained in all the world’s permafrost, but approximately 1670 billion tons of carbon is stored in the permafrost ecosystems in high latitudes – twice as much carbon as is currently contained in the atmosphere.

As permafrost thaws due to the global warming, the frozen organic matter inside it thaws out, too, and begins to decay. Microbes in the soil eat the matter and produce big amounts of CO2 or CH4, which bubbles up through soil and water and back into the atmosphere.

The amount of carbon dioxide and methane being released from permafrost is increasing each year. There is also a possibility that some of the oldest carbon, which has been stored in permafrost soils for millennia, will be exposed, too. As carbon dioxide and methane accumulate in the atmosphere, these greenhouse gasses can accelerate global warming, and may also lead to methane eruptions. 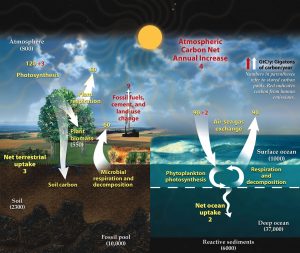