Reindeer (Rangifer tarandus) is a member of deer family, indigenous to the arctic and alpine areas of Northern Europe, North America, Greenland and Asia. In North America they’re referred to as caribou (some sources claim they are diffeent, but closely related animals) comes from the Old Norse word “hreinin,” which means “horned animal.” Caribou is based on the French word for “snow shoveler,” in reference to the animal’s habit of digging through the snow for food.Historically reindeer constituted part of the Pleistocene megafauna. There are two varieties, or ecotypes: tundra reindeer and forest (or woodland) reindeer, much less numerous.

Reindeers have many distinctive and unique traits, many of them being adaptation to harsh northern conditions.

Both males and females grow antlers. They are the only mammals that can see ultraviolet light. Also,reindeer eyes adapt. Their tapetum — the part of the eye behind the iris — changes color from gold in the summer to blue in the winter. Reindeer milk is said to be some of the richest and most nutritious milk produced by any terrestrial mammal. It has an impressive 22 percent butterfat. During the winter a reindeer’s facial hair grows very long down to the lips, which helps to protect the muzzle when they graze in snow. Their noses are specially designed to warm the air before it gets to their lungs. In extremely cold weather reindeer are able to lower the temperature in their legs to just above freezing, which helps them to avoid losing body heat.

Their hooves are particularly special. In the summer, when the ground is wet, their foot pads are softened, providing them with extra traction. In the winter, though, the pads tighten, revealing the rim of their hooves, which is used to provide traction in the slippery snow and ice.

Some subspecies have knees that make a clicking noise when they walk so the animals can stay together in a blizzard. Some North American caribou migrate over 5000 km in a year – more than any other land mammal.

Reindeer was one of the first domesticated animals (around 2,000 years ago). To this day it is an essential part of Sapmi nature and one of the distinctive signs of the north. They change their pasture with the changing seasons, in spring and summer they stay mostly in swampy areas and in autumn they prefer the spruce forest. During summer they eat hay, grass and the leaves of bushes. In winter the lichen and moss from the clean nature of the pine forest is of vital importance for their existence. They’re essential for northern indigenous people: the Sámi language has some 400 words for reindeer and products derived from various parts of the animal. Reindeer are listed as vulnerable according to the IUCN (International Union for Conservation of Nature) Red List of Threatened Species. This is because the species has experienced a 40 percent decline over the quarter century. Climate change affects them in many ways. Mosquitoes, warble fly and nose bot fly, more and more numerous in the north, can be extremely troublesome for reindeer. climate warming will change reindeers’ access to food, as well as migration patterns. 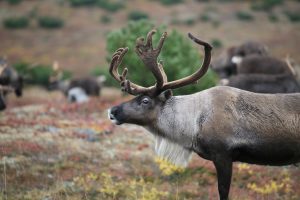 Related resources:
« Previous term: Redfish/rockfish
Next term: Relative age »
Polarpedia has information categorized by main topics. Click on an icon below to view the available terms.