Runes are alphabet used by germanic peoples. The oldest records of runes were found un Denmark and Norway (II AD).

The etymological root of the word “rune” is “runo” which is something of a mishmash of the words “letter” and “mystery”.

Runes are woven into Norse religion and are closely associated with Norse magic (seiðr) and skaldic poetry. The runes were not invented. The old poem Hávamál explains that Odin discovered the runes when he hung himself from the world tree Yggdrasil in order to learn wisdom. He hung on the wind-blown tree for nine nights and days. Just as he was about to die, he found the runes, grabbed them and earned his life.

The actual origin of runes is unclear. Some historians maintain it came from the Latins since it was the language of commerce during the Roman Empire, and Germanic tribes would likely have had contact with merchants, thereby exposing them to the language. There are also scientists who suggest the Furthark is based on the Etruscan alphabet.

Each rune had a name that hinted at the philosophical and magical significance of its visual form and the sound for which it stands, which was almost always the first sound of the rune’s name. Runes played an important part in the lives of the Vikings.

Runes were carved on stone, bone, antler, wood and metal. Runestones were big rocks covered with inscriptions of runes usually in memory of a great man or woman. Over 3,000 runestones are located in Scandinavia.

The runes were often written as a continuous link of text, without spaces between the words or sentences. If the rune master wanted to separate words or sentences from each other, he used notation similiar to the letter X, or perhaps one, two or three points placed one over the other. 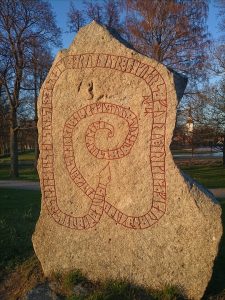 Related resources:
« Previous term: Rock ptarmigan
Next term: Saithe »
Polarpedia has information categorized by main topics. Click on an icon below to view the available terms.