The Svalbard poppy (Papaver dahlianum) gets its name from the fact that it is mainly found on the Svalbard archipelago. It can also be found in north-eastern part of Greenland and northern Norway.

The plant has white and yellow flowers, and grows only up to 25 cm high. A single plant can produce 10 or more flowers, and each flower a capsule with 40 or more seeds. The Svalbard poppy usually grows in rocky sites, but it is resistant enough to stand up to the Arctic climate with severe weather with strong winds. Reindeer and birds – especially snow buntings – graze on it, reducing the seed output.

The Svalbard poppy has evolved some adaptations to resist the cold climate. Its stem is covered with small hairs, which helps retain heat , and its flowers can orient themselves to follow the sun’s movement across the sky, enabling it to maximise sunlight during the short growing season in the Arctic. 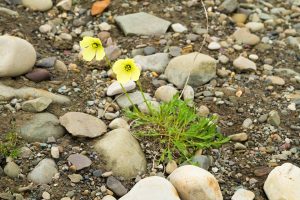 « Previous term: Svalbard
Next term: Svalbard rock ptarmigan »
Polarpedia has information categorized by main topics. Click on an icon below to view the available terms.