Svalbard rock ptarmigan is a sub-species of the rock ptarmigan (Lagopus muta), endemic to Svalbard and Franz Josef Land. It is the only bird inhabiting on the land, which is being observed on the archipelago throughout the year.

The males (cocks) return every year to the same breeding grounds in the end of March, and the females (hens) arrive in early April. They use separate habitats in the winter, and in the breeding season. There is very little knowledge about the location of the wintering areas or possible migration routes during the winter (from October to March). The mating season takes place in late May. There are usually 9-11 eggs in a nest. One cock can have more than one hen at his territory, but the second hen has later and fewer chicks that the first one.

Both sexes have white winter and brown summer plumage. The hens change into summer plumage in April-May, and the cocks in the middle of August. Characteristic for the cocks is a black line from eye to the beak, and red comb above the eye stickout in the breeding season. Adult birds are 35-40 cm long and weigh between 490 and 1200 g. The weight significantly depends on the season (in winter more than 30% mass of the body is fat). The most important predators of the Svalbard ptarmigan is arctic fox, glaucous gull and arctic skua.

The Norwegian Polar Institute has carried out since 2000 the monitoring program registering in spring the males’ territorial activity on Nordenskiöld Land. The main goal of the project is to detect early population changes and long term trends.

Svalbard rock ptarmigan might be hunted in Svalbard from 10.09 until 23.12. The annual harvest varies between 500 and 2300 birds, and does not appear to represent any risk to the population.

Birds of both sexes might use the feeding craters made by reindeers in search for food that is particularly important during the winter, when there is a thick layer of snow. 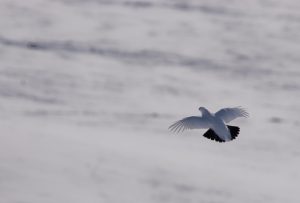 « Previous term: Svalbard poppy
Next term: Svalbard Treaty »
Polarpedia has information categorized by main topics. Click on an icon below to view the available terms.