Zooplankton is made up of hundreds of thousands of different species of tiny animals drifting in water. Some are juvenile or larval forms of the animals (meroplankton) while others spend their whole life as free-floating organisms (holoplankton) Crustaceans are the most important members of the zooplankton. They are the marine counterparts of insects on land. In the Arctic, copepods are crucial crustaceans.

They are a major link between primary production and higher trophic levels and, thus, have a key role in the trophic structure of pelagic communities. Copepods also contribute to biogeochemical cycles by producing faecal pellets, which sink to deeper waters.

In parts of the northern Arctic region, the balance of the food chain depends on the the diminutive copepod Calanus glacialis. This herbivorous Arctic zooplankton species is specially adapted to melting sea ice and the blooming of a few small algal species. To survive the long Arctic winters, Calanus glacialis stores a large amount of fat (lipids), which can amount to as much as 70 percent of its body mass. This lipid-rich zooplankton is the primary food source for Arctic cod, marine birds and bowhead whales. 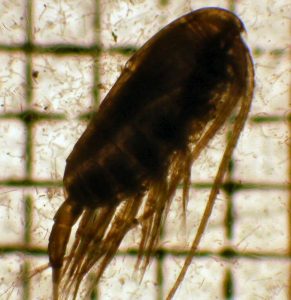