Boreal forest (taiga) occupies about 17% of Earth’s land surface area in a circumpolar belt of the far Northern Hemisphere. Northward beyond this limit, the taiga merges into the circumpolar tundra. The boreal represents 29% of the world’s forest cover.

It is a biome of vegetation composed primarily of cone-bearing needle-leaved evergreen trees, characterized by long winters and moderate to high annual precipitation. The soil of the taiga has few nutrients. It can also freeze, making it difficult for many plants to take root.

Corniferous trees, such as spruce, pine, larch and fir, are common, as they are very well adapted to the climatic conditions. Their slender, conical shape minimizes snow accumulation on the branches, allowing the trees to withstand the weight of the snow during winter without breaking. The narrowness and small surface area of the needles,and a waxy coating, allows the tree to resist the strong, cold winds. Keeping the needles throughout the winter allows the tree to photosynthesize on the occasional sunny, warm winter day, and to begin photosynthesizing in spring as soon as temperatures permit.

Animals living in the taiga include foxes, lynxes, bears, minks, squirrels, while larger ones include grey wolves and their preys: caribou (Canada), reindeers and moose.

The boreal forest stores enormous quantities of carbon, possibly more than the temperate and tropical forests combined, much of it in peatland.

Boreal forests are named after Boreas, the Greek god of the North wind. 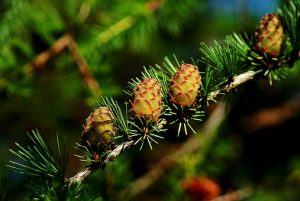