Common eider (Somateria mollissima) is the largest representative of ducks; it lives in the northern regions (Scandinavia, Iceland, Faroe Islands, Siberia, Greenland, Labrador, Nova Scotia). It has a massive silhouette with a large wedge-shaped head and a characteristic profile with a flat forehead. It exhibits pronounced sexual dimorphism (gray-brown female, white-black male with pinkish breast and greenish back of head). Eiders nest on the ground among the rocks, or in the grass near water.

Common eiders feed mainly on molluscs and crustaceans caught from the seabed while diving.

These birds form multi-genital female clans, where females together take care of the young and even help out with the eggs (one  female lays 2-6 eggs).

Eiderdown is used in high quality sleeping bags and special clothing. The annual sales of specialized polar clothing and, above all, the flock and pillow filled with down, are worth more than 30 million euros. The cost of such quilt is 6,000 – 30,000 euros, occasionally even up to 250,000 euros. Ultra-light down is the best known thermal insulation material on Earth. The main supplier of this material is Iceland (they have patented the processing technology). Every year more than 300 certified collectors harvest a total of 2.5 tons of down, directly from the nest, first at the beginning of the breeding season – partly, and then the rest after it’s finished. Female eider, before laying down the egg, fillsa nest with her own down (plucking about 20 g dark gray feathers from under her own feather cover), so that the eggs are perfectly protected from severe cold.

Common eiders are particularly protected in Iceland – they are provided with terrestrial nesting boxes, and known to be trusting towards humans. 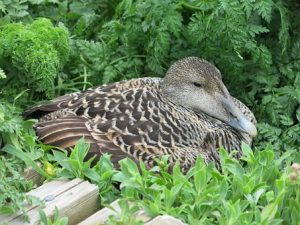 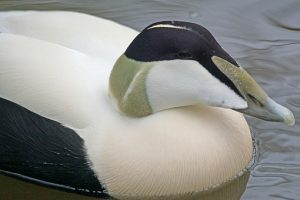 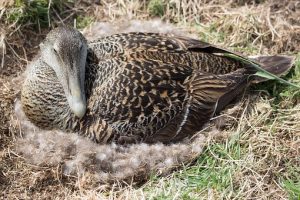 Related resources:
« Previous term: Cod
Next term: Confusion effect »
Polarpedia has information categorized by main topics. Click on an icon below to view the available terms.