Evolution is how species change over time. An evolutionary change always involves a change in the genetic composition of a species. It can occur in a local population of a species, or it can occur more or less for the complete population of the species. If a local population changes a lot compared to the other populations, it may eventually develop into another species. Evolution is constantly happening around us in small, small, steps  but it takes hundreds to thousands of years to form a new species.

Evolution also involves species dying out. Unfortunately, this is a much faster process than the formation of new species. It typically happens if the environment changes faster than the species can cope with. One important historic example is when humans invented guns. Suddenly we could kill animals at a much longer range than they were evolutionary adapted to consider as dangerous. 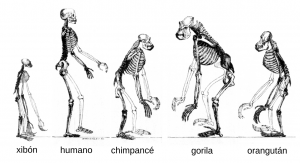 Humans and other primate species have evolved from a common ancestor. Here you can see that they essentially have the same skeleton parts, but that each part differs a little in size and angle between the species. This is evolution! Photo: Tim Vickers, via Wikimedia Commons