Frost flowers are ice crystals forming on new ice, on a calm ocean surface when very dry air is much colder than the water. Moisture from seawater becomes available to a cold atmosphere and surface winds are low, allowing for supersaturation of the near-surface boundary layer.

Frost flowers grow from imperfections in the surface ice (nucleation points) amid extreme sub-zero temperatures nearing -22C , forming spiky structures. They rise to centimeters in height very quickly. Frost flowers are almost three times saltier than sea water, because as they form, a process called brine rejection forces salt out of the porous sea ice, and up into the flowers.

They have been found to house microorganisms; the bacteria found in the frost flowers is much more dense than in the frozen water below it, meaning each flower is essentially a temporary ecosystem, a bit like coral reef. 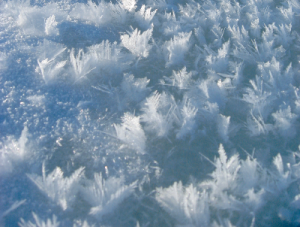 « Previous term: Frost Cracking
Next term: Frost quake »
Polarpedia has information categorized by main topics. Click on an icon below to view the available terms.