John Franklin (born 1786, died 1847) was a British sailor and an Arctic explorer. At 11 years of age, he became a cadet and then his career took him to become a seaman and officer, and finally an admiral of the British Royal Navy. He took part in battles of Copenhagen, Trafalgar and New Orleans. In 1802 he took part in sea expedition, that was first to circumnavigate Australia. In 1819-1822 and 1824-1826, he led land research expeditions to the Canadian Arctic (in Coppermine and MacKenzie River catchments). He was governor of Tasmania 1836-1843.

In 1845, he became the commander of an expedition of two ships, Erebus and Terror, with the goal to cross the Northwest Passage, a sea route between the North Atlantic, through straits of the Arctic Archipelago to the Bering Strait. The expedition met a fatal end – both ships and their crews disappeared. In the years that followed over 40 expeditions were organized, with the important goal to solve the mystery of the disappearance of Franklin’s ships. It was established, that the crews abandoned the ships, which were trapped in sea ice, and went south on foot in search of rescue. The crew died of exhaustion, hunger and hypothermia. The wrecks of the ships were not found until 168 years after the doomed attempt or in 2014 and 2016. 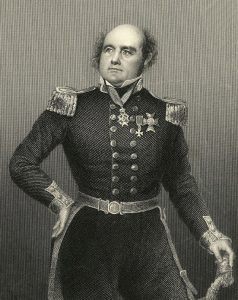 « Previous term: Jet stream
Next term: Jokulhlaup »
Polarpedia has information categorized by main topics. Click on an icon below to view the available terms.