The little auk is an endemic species, which means its natural habitat range is limited to the Arctic Basin. It is considered to be the most abundant species of seabird, with its population size estimated to be over 37 million breeding pairs.

The little auk nests in the shore zones of islands in the Arctic Ocean, mainly in the section of the North Atlantic. Recently, there have been reports of its appearance as far north as the northern part of the Bering Sea. The largest colonies (more than one million individuals) have been observed in Greenland. (FIG.1) The bird likes to spend the winter in the open waters of the North Atlantic, although its presence has also been recorded in open water reservoirs (połynia, polynja, полыиья) within the areas o the Arctic where there is sea ice year-round. The little auk lives in colonies which number from tens to hundreds of thousands of individuals. The birds like to return to the same colony year after year, in hopes to take the same nesting site each year.

The bird likes to establish colonies on rock cliffs, and build its nest in sheltered areas such as crevices, beneath overhangs, and at times on large scree cones (осыпь) at the base of the mountain slopes, several kilometers away from the seashores.

The little auk’s diet consists of marine zooplankton (a variety of protozoa and small invertebrates, including small fish). Because of the bird’s high energy needs, it prefers to eat species that have high fat content. One copepod species called Calanus glacialis, is one of the bird’s favourite foods. As this species of copepod occurs in areas of the ocean with cold currents, changes to ocean currents due to climate change has therefore had a big impact on the distribution and abundance of the little auk’s colonies.

The little auk is able to dive to a depth of 30-50 metres to look for food, and can stay under water for up to 45 seconds.

Every day the bird leaves its nesting colonies for feeding grounds in the open sea 5-15 times a day. During the time of the year when it must feed tis chicks, the little auk usually travels 10-15 km a day, but can sometimes travel as far as 100-150 km. 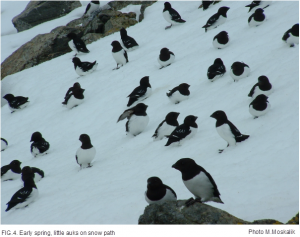 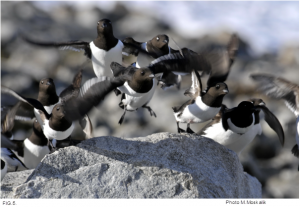 Little auks face several natural predators, such as arctic foxes (арктическая лиса) and birds of prey such as the glaucous gull (бургомистр) which hunts from the air, attempting to snatch individuals from flocks of little auks. 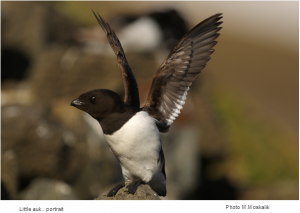