Migration is the regular movement of animals between areas where they live at different times of the year. About 5 milion land birds migrate every year from Europe and Asia, mostly to Africa. Many species of birds migrate along the same routes, following physical features such as coastlines, mountain ridges, and river valleys. Heavily traveled routes are known as flyways.

The most common reason to migrate for a particular season is to take advantage of food, shelter, and water that can vary with seasons. Migration also can happen at different life stages. Sometimes the chosen destination may be safer for the young because of fewer predators or more shelter. In other cases, the destination is safer because the animal requires a different type of habitat when it is young compared to when it is older.

Migration means several weeks or even months of travelling, which may include crossing ecological barrieres like mountains, seas, and deserts. The birds have to face and solve a number of physiological and ecological problems, like meeting the energy requirements of the extended flight, and finding suitable refuelling areas along the route etc. A major problem, however, concerns orientation and navigation: while adult migratory birds are already familiar with the route and overwintering habitats that allowed them to survive in previous years, young birds migrating for the first time have to reach their population-specific overwintering area that is still unknown to them. Birds are driven by extraordinary navigation skills, not fully known to date, based on visual (sun, light polarization, star configuration) and non-visual (magnetic field) internal compass systems. There is also a strong genetic component to migration in terms of timing and route, but this can be modified by environmental influences.

Migratory birds can be hit hard when they are most vulnerable. After very long journeys they face countless dangers. These include the destruction and degradation of natural habitats, the loss of critical stopover sites such as coastal wetlands, illegal killing, poisoning, pollution, and collisions with badly-sited infrastructure such as power lines and wind turbines.

As a result, more than 40% of migratory bird species are declining, and nearly 200 are now classified as globally threatened.

The Arctic tern is a famous migratory bird and record-holder in terms of how far it migrates. 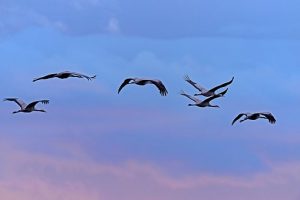