Sea ice is water ice, formed by the freezing of seawater. The name is used to distinguish from icebergs, which are large masses of glacier ice formed on land.

Sea water contains dissolved salts, therefore its freezing point is below 0 ° C (for salinity 35 o/oo  the freezing point is minus 1.91 ° ​​C (Thurman 1982). When it freezes, the salt particles are not a real part of the structure of the ice, but remain in solution, increasing its salinity. Brine (a solution of salt in water) is more dense and falls downward, and is replaced by less saline water. If freezing progresses very quickly (at low temperatures), the brine drops are closed between ice crystals and remain trapped for a while. After about a year, the sea ice no longer contains salt. 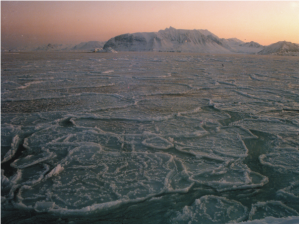