They live in a variety of habitats worldwide: in damp moss, in sand, in fresh water, and in the sea.

They are the toughest organisms on Earth, capable of adapting to a wide range of external conditions. Some can withstand the shock of boiling water and temperatures that near absolute zero. Others have survived in the crushing pressures of the deep ocean or go without water for years. Tardigrades have survived in the vacuum of space. Japanese researchers thawed a group of tardigrades that had been frozen for 30 years.

They are constant part of the Arctic’s animal microcosm. They inhabit mosses, lichens, soil and even the surface of glaciers, some can enter dormant resting. 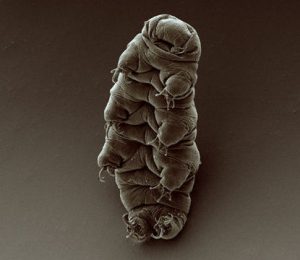