The parent (or source) material of the soil also plays a role. Due to better conductivity, active layers in soils made of sandy or gravelly parent materials can be up to five times deeper than those made from clay-rich parent material.

Although many types of plants exist in permafrost regions, they grow largely at its active layer, since roots can’t penetrate the frozen ground beneath.

Due to global warming, the active layer of permafrost is growing thicker and warmer on average. And as the organic-rich top layer thaws, it is more likely to decay, and as the organic material breaks down, it forms methane (CH4), which can contribute even more carbon to the atmosphere. 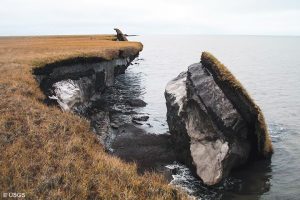