Fractals are geometric shapes, infinitely complex patterns characterised by self – similarity: look the same at various different scales. Many natural phenomena are fractal to some degree. Pineapples grow according to fractal laws and ice crystals form in fractal shapes, the same ones that show up in river deltas and the veins of your body.

The term fractal, derived from the Latin word fractus (“fragmented,” or “broken”), was coined by the Polish-born mathematician Benoit B. Mandelbrot.

Classical geometry deals with objects of integer dimensions: zero dimensional points, one dimensional lines and curves, two dimensional plane figures such as squares and circles, and three dimensional solids such as cubes and spheres. However, many natural phenomena are better described using a dimension between two whole numbers. So while a straight line has a dimension of one, a fractal curve will have a dimension between one and two, depending on how much space it takes up as it twists and curves. Abstract fractals (perfect mathematical forms) – such as the Mandelbrot Set – can be generated by a computer calculating a simple equation over and over. In this case“self-similarity” goes infinitely deep: each pattern is made up of smaller copies of itself, and those smaller copies are made up of smaller copies again. 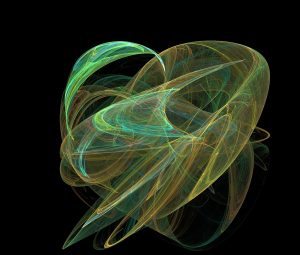 Related resources:
« Previous term: Fossil
Next term: Freezing index »
Polarpedia has information categorized by main topics. Click on an icon below to view the available terms.