Humans have used pearls from freshwater mussels for at least 6000 years. The pearls develop when a grain of sand or another solid particle by coincidence enters into the mussel. Therefore, not every mussel produces a pearl, and mussels are producing pearls more often in some rivers than others.

A rough estimate is that on an average one pearl is produced per 1000 mussels. The pearl making starts if the foreign particle enters certain gland areas of the mussel. A special secrete (often called “mother of pearl”) encapsulates the particle. It takes about 30 years for a freshwater mussel to make a 4 mm large pearl. The pearls develop in a variety of shapes, and only about one out of 1000 pearls are perfectly round and white.

In the Middle Ages, pearls were the property of kings, queens or churches, and pearl fishing was severely punished. Along with the democracy movement of Europe from 1850 and onwards, a widespread overexploiting of pearl fishing started. Many populations of freshwater mussels became extinct. However, many indigenous people (Skoltsami, Lulesami and  Estonians) did not kill the mussel in order to collect pearls. They gently opened the shells of the mussels to shake out the pearls. Afterwards they pinched some sand back into the mussel in order to make new “pearl seeds”.

Today the freshwater pearl mussels are strictly protected as an endangered species in all of Europe. The socioeconomic value of pearls is very low, while the ecological value of living mussels in their original river habitat is very high. An embroidery made of perfect pearls from freshwater mussels. Photo: Paul Eric Aspholm 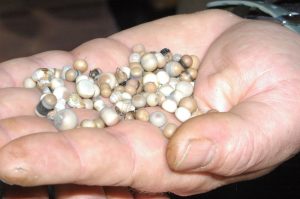 Related resources:
« Previous term: PCR
Next term: Pelagic fish »
Polarpedia has information categorized by main topics. Click on an icon below to view the available terms.